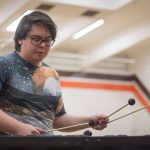 Phil began his marching career in the 10th Grade, initially starting on tenors for 2 years. After discovering the mallet percussion he quickly transitioned to the front ensemble and was named captain after his second year on Marimba.

He is currently in his 3rd year of a Music Technology and Production degree at MacEwan University and spends his time around town in studios and playing live, including working at The Audio Department in south Edmonton and playing Auxiliary Percussion in the MacEwan Showcase Band.